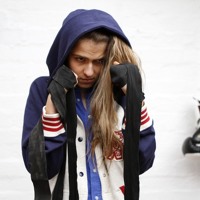 kid-sam
Published:
Jul 31, 2013
Total plays:
20,059
Saved:
141 times
Sounds like: Otouto, Mariah Carey, Oscar Key Sung
Tags: Electronic, female vocalist, dream pop
Why do we like this?
Banoffee (aka Melbourne's Martha Brown) is another Australian artist destined for big things. She's set to make serious waves with her debut release, "Ninja." Inspired by R&B greats such as Mariah Carey and Drake, as well as local Aussie artists like Oscar Key Sung, Banoffee's debut is a minimal yet incredibly catchy song, with Martha's beautiful vocals and swirly synthesizers making up the majority of the sound.

However, underneath the pleasant, poppy sound, she proudly states that "I'm a fucking ninja," and judging by the fabulous music video, isn't afraid to show it. As well as being an English dessert (well, according to her website, anyway) and playing in the bands Otouto and Dreaming & Delicious, Banoffee's star is surely set to rise over the second half of 2013.