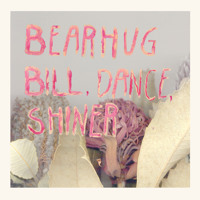 Hugh McClure
Published:
Jun 10, 2012
Total plays:
31,835
Saved:
85 times
Sounds like: Broken Social Scene, Real Estate, Wilco, Badly Drawn Boy
Tags: indie rock, indie pop, lo-fi
Why do we like this?
Sydney's Bearhug have been producing some seriously loveable music for some time now. Their discography already contains two EP's (the last was 2010's Anything), and they've toured alongside the likes of Built to Spill and Broken Social Scene. Their tour with the latter was significant, given the obvious influence in their music, and there are touches of other great bands that shine through as you listen. They've settled into their own style though, and the result is some gorgeous lo-fi music.

The band spent most of 2011 holed up developing and rearranging previously written music. From this came the recently released album Bill, Dance, Shiner - nine-tracks of delicate-simplicity, full of unforced and poignant songs. It opens with the upbeat "Over the Hill," a classic indie-rock track, before the album settles into a more subdued flow. Plenty of West Coast lo-fi follows, with the mellow "Shiner" and slow, lonesome "Cherry Red" the standouts. Single "Angeline" was written during a stage of Springsteen obsession: "It's about motels and cars and crashes and is romantic in the sense of everything going to hell with the best intentions." The little things make this song, the woodblock chorus, twinkling guitar riffs and breathy vocals.

There aren't too many current Australian bands like this floating around. If you like lo-fi, they'll be a perfect new addition to your favourite bands list.
- Google Hugh McClure
Streaming source: https://www.youtube.com/watch?v=rk9WOTwtUO8
TOUR DATES
View all X tour dates for .