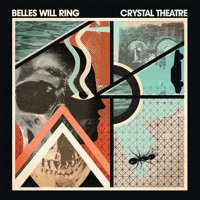 Hugh McClure
Published:
Oct 18, 2011
Total plays:
31,961
Saved:
56 times
Sounds like: The Bees, The Thrills, John Steel Singers, Tame Impala
Tags: folk, folk-rock, psychedelic
Why do we like this?
My new favourite genre is psychedelic folk -- an interesting combination, huh? Want to know what it sounds like? Listen to Belles Will Ring's recently released LP Crystal Theatre and you'll find out.

Hailing from the Blue Mountains, just out of Sydney, Belles Will Ring recorded Crystal Theatre in the small country town of Portland (not Oregon!) during 2010. After two previous releases, Mood Patterns (2007) and Broader than Broadway (2008), the band wanted to delve into themes of darkness and isolation originally dreamed up watching the Coen Brothers' No Country for Old Men. These thoughts continued to develop over the following years, and upon their arrival in the country they started immersing themselves in their new surroundings. Ideas started flowing rapidly.

Despite running the risk of going completely mad, the plan worked, with the album perfectly capturing the separation from reality. It was not always smooth sailing; they describe their time away as a completely mixed bag of emotions, from glorious elation to utter despair. Wanting to experiment with new sounds, the band used a variety of instruments, flutes, trumpets, and vintage keyboards all playing a part on the album.

Crystal Theatre (named after Portland's tiny cinema) drifts perfectly from song to song, the album telling a fascinating musical tale. Some tracks are reminiscent of Neil Young's moody Dead Man movie score, while others follow in the same buoyant vein as The Bees. "Street Lamp Stomp" is effortlessly cool, with its flashing guitars, stomping beat, and harmonica making this one irresistible. Keyboardist Lauren Crew describes it as "The ghost train from your dreams".

"Come to the Village" reminds me of one of my favorite Australian bands, the John Steel Singers. The almost eerie vocals and regimented beat hypnotise the listener before the track changes tempo into a much languid style. This leads perfectly into "Trouble in Deepwater," which should be listened to daydreaming and staring up at the clouds. Despite the album's quirky nature, it's not difficult a difficult listen whatsoever.

With a recording process which was not particularly normal, you shouldn't expect a normal sounding record. What you get is much better, a fascinating album which flows fluently. Normal is boring, psychedelic folk is not.