In continuing their home-rolled setup of Good To B Home, Blu and Bombay released "Summertime" back around Memorial Day, but fuck that yo, it really feels like summer now. Here in central California, it's damn near 100 degrees every day, there's no ocean breeze and only two public pools to use. Still, when this reconfiguration of the Fresh Prince classic that had folks wondering if Rakim was ghostwriting for him hits the speakers, it's almost like the beach moves a few hundred miles closer.

Bombay brings the G-Funk into the modern age of medical cannabis, adding a bit of slump and a good low-end presence to the classic sounds. The producer also steps up from behind the MPC to spit a few bars on this one. Blu does what he does best, flipping acrobatically all over the beat, showcasing his dexterity as well as his encyclopedic knowledge of rap, dropping West Coast references all over his verses while checking back into Mr. Smith's original rhyme structure effortlessly.

I've said it before and I'll say it as long as I have a place to: Blu is a modern hip-hop treasure and we should be thankful he's here to bug us out while it's happening. 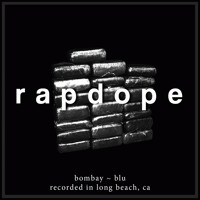