Taylor Fife
Published:
Feb 23, 2010
Total plays:
348
Saved:
6 times
Sounds like: Starfucker, Cut Copy, MGMT, Metronomy, Thieves like us
Tags: Electronic, synth-pop, butterfly bones
Why do we like this?
Bay Area artists Butterflybones and Man/Miracle are teaming up with Third Culture Records to combine a spectular sampling of sound with the most tortuous title I've ever had to type. Man/Miracle's use of a foreslash has rendered the traditional way of listing groups participating in split releases immensely confusing, and Butterfly Bones have chosen to stick it to the Windows file name protocols by using that pesky "less than" symbol. Although your downloaded version of the song may appear as "_3," I promise that if you're into slick and sexy synth grooves you will still very much heart this release. If equally dancey guitar jams are your thing, you'll definitely want to flip your vinyl over to the B side for the feedback laden Other

On "<3", Butterfly Bones continue their descent to the dance floor with four-on-the-floor combined with a hook so catchy you feel guilty just listening to it. The track also gave the Berkeley and San Francisco trio a chance to put their hands on all those knobs and buttons on their mixer. The arpeggiator is still cranked up all the way, the tight vocal harmonies remain, and the synth and guitar licks still bounce back and forth, but the added effects in "<3" portend the ass-shaking direction this band is headed. Looping, echoes, and filters add a dash glittery garnish in this already much-more-than-standard synthpop.

Oakland group Man/Miracle's half of the vinyl brings a helping of rock to the release with a bluesy take on dance-punk. The feeling that you might have traveled to 1983 on side A hasn't gone away, but instead of hearing traces of A Flock of Seagulls "Listen," it's Talking Head's "Speaking in Tongues" that comes through on your headphones. "Other People" is already available on Man/Miracle's full-length debut, "The Shape of Things," which comes out today on CD and was released for download earlier this month. In March, both these groups will be treking it up and down the left coast, so check them out if you're looking for a dance party. 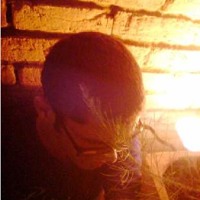