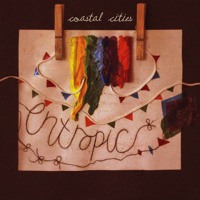 Justin Lam
Published:
Apr 18, 2013
Total plays:
54,300
Saved:
490 times
Sounds like: Two Door Cinema Club, Foals, The Drums
Tags: indie rock, indie pop, dance
Why do we like this?
Detention seems like an odd place to form a band, but that's exactly how England's Coastal Cities began their musical journey. I remember hearing the young Brit pop five piece last year with their single "Relief," and I thought they possessed great potential (especially after being likened to Two Door Cinema Club, Foals and Friendly Fires, to name a few).

I think the great thing about young bands is how fearless and ambitious they are. As you would expect, they're full of energy and this is evident in Coastal Cities' latest single, "Entropic." Fitting its name, the track has a tropical sound, with jangly post-punk guitar riffs and subtle, uplifting electronics. It also possesses an extraordinary amount of dance sensibility; I would imagine their live performances to be one hell of a good time.

Fresh out of college, I think we can expect these guys to start hitting their stride much sooner than later.
- Google Justin Lam
Streaming source: http://soundcloud.com/coastalcitiesband/entropic
TOUR DATES
View all X tour dates for .