Hugh McClure
Published:
Jun 11, 2013
Total plays:
69,003
Saved:
561 times
Sounds like: Tycho, xxyyxx, Giraffage, Bondax
Tags: downtempo, ambient, chillout
Why do we like this?
Since we brought you the debut single from Sydney electronic duo Cosmo's Midnight back in April, the twin brother combination have continued to gain plenty of attention. In recent months, they've supported international heavyweights xxyyxx and Cashmere Cat on their tours down under -- the perfect lead-up to the release of their debut EP, Surge.

Of the four tracks from the EP, "Phantasm" is probably the most poppy (I likened them to Purity Ring and Disclosure as a reference point). The remaining music delves a lot deeper into the lush soundscapes the guys touched on with their first single. The vocals on title track "Surge" are hardly dominating, really just being used as another layer of the overall sound, while "Lover's Shadow" and "Won't You Stay" are almost entirely instrumental. What this means is that the production needs to be pretty spot on to maintain the listener's attention -- and I wouldn't be writing this if it wasn't. Deep and dreamy, any of the tracks would be perfect for our Sunday Night Chill posts, but I've settled on the slightly more uptempo "Lover's Shadow" to feature here.

Cosmo's Midnight create the type of music most electronic artists aspire to, which is made even more impressive given it's their first attempt. Head over to the Bandcamp for a "name your price" download of this brilliant EP, and while you're there, check out some of the other releases from their label mates at Yes Please (including Oliver Tank, Guerre and Wintercoats).
- Google Hugh McClure
Streaming source: http://soundcloud.com/yespleaserecords/lovers-shadow-1
TOUR DATES
View all X tour dates for . 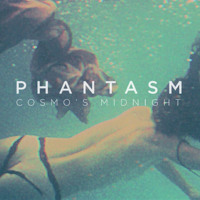