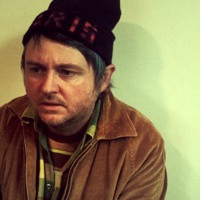 Darren Cross When The Chills Are Coming

It's been a long time coming but Australian treasure Darren Cross is finally ready to unleash his debut solo album under his own name.

First finding fame as a member of 90s alternate-rock trio Gerling (a band 10 years ahead of their time), Cross went on to pursue electronic music as the E.L.F. when the band went on an indefinite hiatus in 2007. After four years creating weird and wonderful dance music, Cross shed his alias and turned his attention towards country and folk, most recently becoming part of the neo-folk duo Jep And Dep. Seemingly having found his musical niche, Cross is ready to deliver his first solo release, _Xantastic, this coming September.

The albums first single is the contemplative acoustic number "When The Chills Are Coming." Cross' maturity as a songwriter and a musician are both on display, with his weathered vocals conveying a range of emotions over the delicate folk-like guitar strumming. There's an honesty and transparency to Cross and what he brings to the table and it shines through on this track.

As a longtime fan of Cross' various musical projects, I for one am extremely excited to hear _Xantastic.

_Xantastic is set for release September 4.