On "Shadows," her latest release since 2015's After, Doe Paoro's and Son Little's voices melt, mix together, and solidify in the crevices of the mind like a stream of sonic sugar. The song is gentle in its sound and delivery, armed with a contemplative rhythm and a sparse arrangement of drums, piano, and guitar.

The track's blues influence is made apparent by the thick, yet wispy harmonies that carry the main voices; along with the intermittent sound of a tambourine that transports the listener to some desert crossroad, where the silence is only pierced by the haunting sound of a rattlesnake warning wanderers to run away.

However, unlike that deadly serpent, this song invites you into its shadowy den with words that ring with sincerity. The track is filled with images of pain and despair, which are later countered by the lyrics, “Every struggle is its own kind of love/ Every shadow gets its shape from above.” These heartfelt words are what gives the song its feeling of honesty, adding to the beauty of this collaboration. 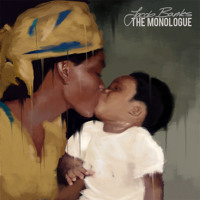