Tobias Handke
Published:
Jun 09, 2013
Total plays:
20,027
Saved:
169 times
Sounds like: Interpol, Joy Division, Maximo Park
Tags: indie rock, post-punk, the national
Why do we like this?
Editors are set to release their fourth album The Weight Of Your Love on July 1, and in the lead up have given fans another track, the melodic "The Sting." The track is the B-side to first single "A Ton Of Love," but diehards will recognize the "The Sting" as an Editors live favorite that has been doing the rounds for a number of years, although this is the first time it has been available as an official recording.

This incarnation of the track is a little different from the original version floating around on YouTube. Gone are the synths, with an emphasis on the duel between guitarist Justin Lockey and drummer Ed Lay, while frontman Tom Smith's familiar baritone is much more uplifting as he warns, "I'm in the corner with a wasp sting in my throat."

Although only a B-side, "The Sting" recalls their earlier material and would have been a better suited choice for their first official release. Hopefully the album is more "The Sting" than "A Ton Of Love."
- Google Tobias Handke
Streaming source: https://www.youtube.com/watch?v=PiT_aiSxC3Q
TOUR DATES
View all X tour dates for . 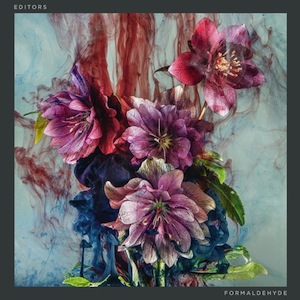