I've already listened to this song more than 10 times today. It's the second time that Everything Everything have totally taken my attention (the first time was for their single "Cough Cough").

What's so good, you ask? Well, if you forced me to peg it down to one thing, I'd have to say that originality reigns supreme. Much like their compatriots Alt-J, these guys aren't afraid to experiment with sound. Their intricate guitar work and percussion compliment the stand-out vocals fantastically, with the net result being a conglomeration of audio that doesn't get old no matter how often you listen. 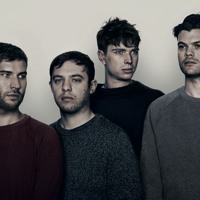