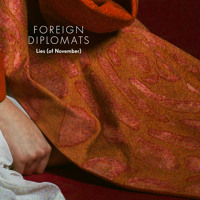 Foreign Diplomats continue in the Montreal tradition of great emerging, stirring, and ground-breaking indie rock bands that harness the combination of seemingly contrary sounds with ease.

Their brash creativity pours forth disco tones, baroque melodies, and pop vocals that are at once whimsical, wistful, and brazenly observant.

With their debut full-length album Princess Flash set to release this fall, we're excited to premiere the first single: "Lies (of November)." It's a snapshot of the smart and playful yet resounding music that makes Foreign Diplomats a band to keep an ear on.

Working with producer Brian Deck, whose previous work includes Modest Mouse, Counting Crows, and Iron & Wine to name a few, the band has tapped into their tremendous potential that has us eager to watch this band for years to come.

Arcade Fire - I Give You Power (Ft. Mavis Staples)