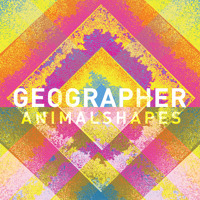 Jennifer Kahn
Published:
Aug 20, 2010
Total plays:
19,737
Saved:
87 times
Sounds like: Yeasayer, Grizzly Bear
Tags: indie pop, experimental, folk
Why do we like this?
Geographer first caught my attention with the bright synths and lush, floating vocals in the single "Kites" off their EP Animal Shapes. About 45 seconds in, the song bursts into a flurry of electronic layers with cello woven into the mix as well. It's just a gorgeous song "” danceable, but with some hints of melancholy just underneath the surface.

The band formed as a kind of catharsis for lead singer Mike Deni. In 2005, after the deaths of his father and sister, Deni left his hometown in New Jersey for San Francisco where he eventually met band mates Nathan Blaz (cello, electronics) and Brian Ostreicher (drums). Their 2008 record Innocent Ghosts captures these feelings of loss and loneliness, but also manages to bring out a sense of hope and exuberance somewhere on the horizon.

Some of my favorite tracks ("Rushing In, Rushing Out," "Caught A Fire") feature vocals from Kacey Johansing; there's something really beautiful about her strong, folksy voice combined with Deni's more somber vocals. On Animal Shapes, Geographer moves in a livelier and more experimental direction from Innocent Ghosts, the result of touring around clubs in the Bay Area and honing a sound better suited to live performances.

In a recent interview Deni says, "I want to make soulful music from outer space," which is exactly what Animal Shapes is "” a densely textured tapestry filled with all sorts of otherworldly sounds. With the exception of maybe the first track, every song title seems to be about the sky ("Kites," "Heaven Waits," "Night Winds") or far-off places ("Verona," "Paris").

This is a band that wants to take you on a journey and explore new territories of sound; even the band's name, Geographer, suggests this kind of musical wanderlust. The EP was released in March this year, but passed under my radar at the time. It's definitely worth backpedaling to take listen it to now, along with Innocent Ghosts "” these guys are not ones you want to miss.
- Google Jennifer Kahn
Streaming source: http://soundcloud.com/geographermusic/geographer-2-kites
TOUR DATES
View all X tour dates for .