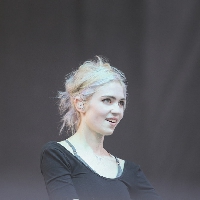 Grimes released her major hit "Go" this year to tremendous response. But recently she unveiled what she thinks is the original version of the track on her Tumblr. Subtitled "SMX Version," Grimes states that it isn't "particularily different." But listening for yourself you'll hear that it's much more raucous compared to the original. Grimes did admit that her and producer Blood Diamonds were “extremely caffeinated” the day they recorded it.

Here's her full statement about the track:

haha james just sent me this weird demo of go, considering the wackiness of the breakdown i assume this is the orig demo cuz we were extremely caffeinated that day

in any case i dunno if its particularly different from the ‘final version’ but im always interested in hearing demo versions of things so i figured yall mite b. i think we mighta mixed a bit of the soul out of it in retrospect, i appreciate the absurdity of mike’s 2nd drop, the thicker snares in the intro etc. its a bit more crowded

also these are demo vocals for songwriting purposes only and they suck a lot so dont mind them.