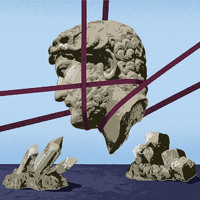 Hannah Levy
Published:
Feb 09, 2010
Total plays:
17,588
Saved:
46 times
Sounds like: LCD Soundsystem, Hercules and Love Affair, Junior Boys, Miike Snow
Tags: electro-pop, synth-pop, dance
Why do we like this?
All hail Hot Chip, who I have just crowned kings of the British electropop scene. Exhibit A: Their new album, "One Life Stand," which Americans just got their paws on today. The fourth in a string of solid releases ("Coming on Strong," "The Warning," and "Made in the Dark" preceded), this album truly sets Hot Chip apart from the other UK bands clamoring for the electro/dance/synth spotlight.

To all you naysayers who will inevitably listen to "One Life Stand" with a critical eye, pointing fingers at slower songs like "Brothers" and "Slush," I ask you to listen to the album again. And again.

Following the disco-influenced tunes of "Made in the Dark" with calmer, more cohesive tracks, "One Life Stand" is a treasure trove of sophisticated songwriting. I'm a sucker for well-written lyrics, and I'm thrilled that the songs on this album have the same thematic pulse.

Hot Chip exchanges lighter dance hits like "Shake a Fist" (Made in the Dark, 2008) for more well-rounded disco beats like the title track "One Life Stand" and "We Have Love." I'm also partial to the auto-tune rifts on "I Feel Better," although some reviewers have called the song "a regrettable fusion of Cher and the dregs of mid-'90s dance pop" (Paste Magazine).

At first, I was split on the 6:31 minute piano ballad "Slush"...but you know what? I think it works. In fact, I think the whole album foreshadows the kind of music we'll be seeing more of in the weeks and months to come. Hot Chip has set a high standard, but there's always room for contenders.