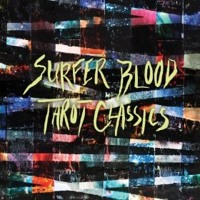 They've released two LPs, Astro Coast (2010) and Pythons (2013), as well as an EP titled Tarot Classics (2011). As they're gearing up for another album release, I was able to catch up with drummer Tyler Schwarz. The band will be touring the nation in October with We Are Scientists and Eternal Summers. Check out dates on their website.

Is there any new music on the radar for Surfer Blood?
Yes, we are at home in West Palm Beach now. We're done recording, and finishing up the mixing process. Right now we are without a label. Once we're finished mixing, we will shop it around. Hopefully it gets picked up and released before the end of 2014.

Why are you currently without a label?
It was a long process. When you sign with a label, there's a trial period to see if you fit their mold. I don't know what Warner Bros Records was expecting from us. Now it doesn't matter if we have a record label or not, but they do help a lot with promotions and tours. It was just time for us to make a change.

What is your favorite music video that you've made so far?
"Floating Vibes," because it's fun to mess around. It was shot at Palm Beach State College down in the theater department all behind green screens.

What is your favorite song to play live?
I personally like playing "Miranda." The crowd really gets into it - it's got a punk rock vibe, and it's fun to see how crowds react to that one.

Are you touring soon?
We're playing some shows in Florida - Ybor City Block Party in Tampa on Saturday, Sept. 13th. Sunday, Sept. 14th, we play at Connection Festival in Jacksonville. Also, we're doing an East Coast/Midwest tour with We Are Scientists and Eternal Summers starting in October.

What's your favorite tour stop in the US?
Portland, Oregon because we've got a lot friends there, and they bring their friends to the show. I personally spent a lot of time there.