Last week, the soundtrack for the new Tim Burton flick Frankenweenie was released.   The movie is based upon a short that Burton made for Disney way back in 1984, brought back to life using the stop-motion animation made famous by The Nightmare Before Christmas.  Paying homage to classic horror movies like Frankenstein and Pet Semetary, Frankenweenie is about a boy who brings his dead dog back to life using the wonders of science.

As if Tim Burton making a new animated movie wasn't enough of a draw, the soundtrack features some of indie music's heavy hitters, like Passion Pit, Kimbra, Grouplove, and even Robert Smith.

One of the lead tracks off the soundtrack is a nice acoustic track from Karen O of the Yeah Yeah Yeahs.  She returns to some folky, indie pop akin to her work on the Where the Wild Things Are soundtrack.  The track features a tropical groove and gets a bit quirky with some dog barks and creepy vibraphone.  Despite the quirkiness, it is definitely worth checking out.  Also check out the movie when it drops on October 5. 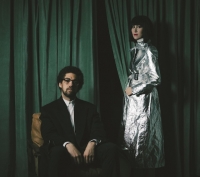