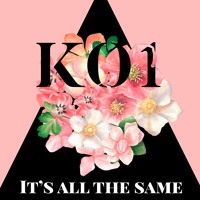 KO1 It's All The Same

(Said passion for music clearly runs in the family, as his brother Pascal Righini (of the Plastics) has featured numerous times on Indie Shuffle for his side project Yum Yuck).

Sasha's latest offering comes in the form of an EP titled Soul Love, released under the moniker KO1. This single, "It's All The Same," stood out to me for its lofi indie rock sensibilities and generally catchy melody/approach. It's short, sweet, and to the point: the perfect type of single for 2020.