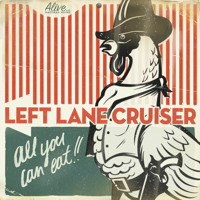 el gringo rico
Published:
Feb 04, 2010
Total plays:
4,524
Saved:
2 times
Sounds like: The Black Keys, R.L. Burnside, Black Diamond Heavies
Tags: blues rock, garage, left lane cruiser
Why do we like this?
Grab your whiskey and get ready to rage. I've never heard a more powerful and gritty blues rock duo than these guys. Left Lane Cruiser is a two man outfit out of Ft. Wayne, Indiana. They're a couple of thrashers that can play the hell out of some punkesque garage blues. Think along the lines of a possessed Black Keys, Jack White without his cute peppermint outfits, or even ole' R.L. Burnside fresh off divorcing his sixth wife and a four day bender. These guys don't F around.  Brenn "Sausage Paw" Beck plays the ever lovin' shit out of some drums (no joke, dude broke his hand 5 songs into a set a couple years back) while Freddy J IV tears you apart with insane licks off the slide. I dare you to try and listen to these guys and not immediately want to stay up all night slamming shots of Old Crow.

Been listenin' to these fellas for a few months now and regret nothing. Definitely check out their older albums too: "Bring Yo' Ass to the Table" and "Gettin' Down On It." Both contain equal amounts of energy and are phenomenal in their own right.

Somewhere there's a world where Left Lane Cruiser is blasting out of every '72 Chevy Nova and broke-ass VW van, the road a bleared smudge in the rear view mirror. Drums that burn down bridges full of oil and fire, a guitar fucked into submission with god shining his face across six strings of hillstomptrash skull-fuckery. Above it all a voice all cracker-ass kick and wail..."feed me, baby, and I'm yours." It's filthy Delta swamp debris, washed ashore and hitchhiking it's way to the heart of last night's ramble. - Big Rock Candy Mountain

Sounds like: The War on Drugs, The Black Keys, Dan Auerbach, The Dead Weather
Tags: rock, psychedelic, blues rock
Save (47)

The Black Belles - What Can I Do?