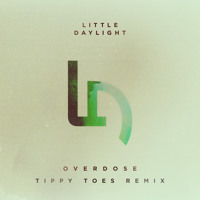 Lori Kay
Published:
Apr 21, 2013
Total plays:
14,414
Saved:
93 times
Sounds like: Charli XCX, Cut Copy, Sir Sly
Tags: electro-pop, synth-pop, pop
Why do we like this?
It's pretty evident that we have nothing but love/admiration/obsession with the Brooklyn trio Little Daylight. We've posted every one of their remixes and their two songs released thus far. I got a chance to see their first live performance for Neon Gold's monthly pop-up show at Andrew W.K.'s own Santo's Party House in Manhattan.

While the crowd of metro-bros and their dates congregated for Goldroom and Alex Metric, the majority of the congregation was there for, and left right after, Little Daylight's set. With the lights dimmed to darkness, Little Daylight crept onstage, and as the lights raised, the smoke framed their fragile silhouettes. As way of introduction, they highlighted the strict drumbeat that held us captive all night and  the adored effeminate vocals stole everyone's attention. They were soft when needed, yet floated to the top of the permeating electric and percussion sound they're lauded for.

The band opened with an unknown song; using context clues I can assume the title might be along the lines of "Restart," (due to the excessive repetition of the word), and gleefully hope it's a sneak peak into their next release. They enjoyed their set almost as much as the audience, as they played their fan-favorite remixes along with their own singles "Name In Lights" and "Overdose," which they used to close the set, compelling every member of the crowd to spill drinks and tears to the electrically romantic song.

But before Little Daylight rushes off onto Charli XCX's tour, working alongside Maria and The Diamonds, we caught a few words with them.

What are your musical pasts? Is this your first musical endeavor?

We're reading the David Byrne book How Music Works and he makes the argument that music is created to fit its space and context, like how Ghanaian drums are ideal for an echo-less savanna and pipe organs fit the cavernous, reverb sound of a cathedral.  We've all played music since we were kids, and we've been in the studio before, but Little Daylight is the "room" we're in now and we're making songs that fit into this new space.

With only two songs now, can you give us a timetable for your next creations?

We're constantly writing and recording music.  We are currently planning our next release, and will let word out once we finalize release dates.  Rest assured there will be a lot of new Little Daylight music coming out over the next year.

How did the name Little Daylight happen?

We started the band last summer by setting up a studio at a friend's lake house for three weeks. Out of those sessions came our first few songs and the name Little Daylight. Little Daylight felt right to us; it gives you the feeling of mid-day sun but changes it to be either sweeter and more familiar or darker and fading, depending on how you think of it.

Were you aware there's a Twitter just for your fans, (@lildaylighters)? How does it feel to have your own cheerleaders?

This crew that started our fan Twitter put their hand up to pledge support way early in the game and we love them. They must moonlight as fortune-tellers too because the other two acts they go hard for are Marina and The Diamonds and Charli XCX, the two artists we're going on the road with in the next few months.

Let's talk about your video for Overdose, I know it was shot during the blackout here in NY. Was it planned at all? How did it happen?

A few days after Hurricane Sandy hit New York, the power still hadn't come back for a lot of Manhattan. We thought: When will New York ever look this dark again? Let's shoot some footage for the band. We called up a team of friends, "Hey, let's get out there and shoot. Tomorrow." They were all about it. By the time we got out where we thought we'd shoot, the power had been restored. So we raced! We knew it'd only be a matter of hours.

Do any of you have Ok Cupid? You don't have to tell us which one, but any distinguishing traits on there/how can we find you on there?

If you want a date, you'll have to ask face to face.

So, you heard it here, ask them out on a date when they make it to your town. You can find the dates of their tour here!