Best Coast Crazy For You

It took about fifteen seconds of Best Coast's first EP Make You Mine (2009) for me to fall in love with front woman/guitarist Bethany Cosentino, want to start a band with all my friends, and start surfing again. The EPs that followed, When I'm With You (2009), Best Coast (2009) and their full-length Crazy For You (2010) only made that love grow fonder.

It is no surprise that I am not alone in my love of their unbelievably catchy, happy, and danceable music. When they first played at the Great American Music Hall in San Francisco, they opened for Indie Shuffle favorites Camera Obscura. Now, as first-time headliners for the venue, they had a sold-out show (on a Tuesday night, no less).

After Sonny and the Sunsets finished their opening set, the crowd began humming with energy and eagerness for the headliner to make it up to the stage. From the balcony, the sea of fans looked immense, not even counting the rows of people on the second level. As soon as the lights went down, I thought Justin Bieber had taken the stage as all sorts of girly screams and shrieks filled the venue. The band wasted no time in getting right to the music. Everyone was dancing on the main floor, balcony, at the bar, in the bathroom line -- you name it.

Each song was short and sweet, not unlike their EPs. They played true surf-pop that Dick Dale and Brian Wilson (Beach Boys, not Giants) would approve of. It could have easily been an 86-degrees and sunny weekend, not the cold Tuesday evening that it was. Cosentino and the band seemed very excited to be there, and on tour in general, and was gracious enough to grant a "Go Giants! Fuck Yeah!" shout-out. It was crazy to hear her speak versus sing, as her natural voice is a great deal higher than her performing vocals. But with her skintight dress and aqua-blue guitar, she looked made for the stage.

The band played fast and hard for the upbeat "Happy," but made everyone in the audience swoon during tracks like "The End" and "In My Room." Though many songs express Cosentino's bewilderment, longing, and plain romantic sentiments for guys, each is done in a way to make the mood happy. "Wish He Was My Boyfriend" kept everyone dancing and swaying like Dick Clark and "American Bandstand" was taping the show. (Do people even know what AB is anymore?)

It didn't come of too much a surprise that their full-catalog set was over in just under an hour. The band played each song like we were all their friends coming to see them practice in their garage. They still had some energy left for a short but exhilarating encore. They saved the apparent crowd favorite of "Each & Everyday" and closed with a new song that they had only practiced just before performing that very night. They left the stage with all of us in the crowd wanting so much more, but having to settle with listening to our records and hoping for a phone call. Surely Cosentino can relate. 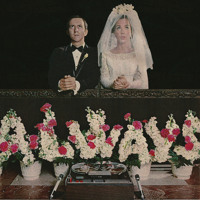