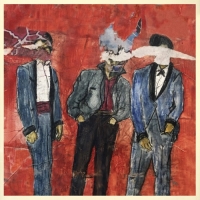 Lord Huron Not Dead Yet

Elvis at the Outer Limits Club

Welcome to the Outer Limits of Lord Huron's musical evolution, this turnaround from what I am used to hearing from Lord Huron had me feeling like a kid caught in 80's country-rock nostalgia.

"Not Dead Yet" takes the ever-present acoustic folky guitar of Lord Huron and gives it a kick, an Elvis Presley kick, a kick from the thematically accurate grave. The song's an easter egg montage of wailing country noises - from a layered collage of strumming and claps, a bass slamming with Texas road aesthetics, and a grunting, deeply-clenched, vocal performance from the lead singer.

This isn't to state the whole song is a nostalgia trap. Something about this song is slightly off. It might be the Outer Limits inspired music video, the Blue Oyster-esque composition of the song in its totality, or just the natural feel of a song involving Lord Huron.

But like every good Outer Limits episode, this song keeps you on the edge of comfort and doesn't let go until the credits.

Side note: this is my song of February, by a mile.