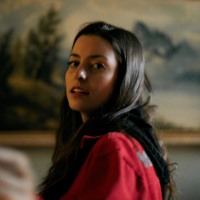 Earlier this year, Lyrah released her debut EP, Chemicals,and caught the attention of many. Several months and 130,000 plays later, the San Francisco based singer-songwriter and producer graces us with a stripped down version of her single “Down Low”, a brooding and sultry re-working of her most popular track. Though she only has one EP under her belt, she’s been honing her skills as a songwriter and performer for years, writing for other producers and playing piano on tour with Paul Thomas Saunders.

The original single has relatively sparse production that somehow feels big and majestic, framing and blending seamlessly with Lyrah’s pop-noir vocals. This stripped version is similarly scant, yet evokes an entirely different mood, giving the song a new meaning. Where the original version hinted at a bit of playfulness and coy mischief in it’s dark but poppy chorus, this version is more melancholy and lonely.

Think dim lights and red wine, the kind of sad pop song you’d hear in a moody Fifty Shades of Grey scene. “Down Low” was written about dating someone who had selfish reasons and only wanted to show her off as a trophy, but the original felt tinged with a bit of flirty satisfaction, playing hard to get. The stripped version feels more like an agonized and regretful story of someone who really wanted to like someone who turned out to be different than they’d hoped. Do you know what I mean?

“Down Low (Stripped)” is out now and you can hear it here. If you like what you hear, give the Chemicals EP a try. I promise you won’t be disappointed.