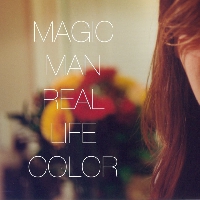 Magic Man is Sam Lee and Alex Caplow, two friends from Boston who wrote and recorded their first album while traveling across the French countryside volunteering on organic farms. The album was further polished back in the States, sent back and forth between the band members over the Internet, with final tweaks and edits done in their dorm rooms at separate colleges. The final result is Real Life Color "” ten songs of ghostly synth-pop

that is twinkling with just enough electronic blips to warm your heart.

The album is beautifully structured "” it really needs to be listened to the whole way through (which the band has made easy by providing a free download of it in its entirety on Bandcamp). The first track, "Swell Song," is an ambient, instrumental opener with a pulsing heart beat, electronic tinkling, and some muffled background chatter. It flows seamlessly into the next track, "Monster", which gradually builds to a shimmering electro-pop finish, leaving your ears properly warmed up for the rest of the album.

"Darling" is my favorite track of the bunch, I think just because the lines, "I'm feeling like a basement lover / cross eyed or buried undercover," immediately got stuck in my head. The title of the album is also tucked into the lyrics of this song: "I'm feeling like we know each other / flashback but in real life color." It's the perfect image to describe their sound "” soft, muted synths, bright bells and static crunches that evoke hazy memories simultaneously bursting with life.

"South Dakota" has a delicate, music box-like quality; soft, but never lacking in passion, with intensity building throughout the song. I find myself more drawn to the quiet and reflective moments on the album, even though the songs with catchy synth hooks and a more upbeat feel (see: "Monster," "Daughter," "Polygons") are so much fun. To me, Magic Man is most compelling when they slow down the beat a bit and let the beauty of their layered compositions sink into your ears.

Real Life Color closes with a reprise of "Darling," this version hushed and accompanied by acoustic guitar strumming. It's a nice nod to the beginning of the album, but this time transformed into something a little more contemplative, leaving you humming the lines, "we'll be talking, talking, talking / all the way home," long after you've taken off your headphones.