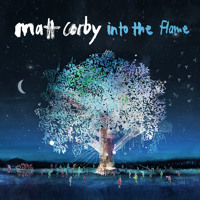 Australian Idol is not the regular starting place for a successful indie artist, but Sydney's Matt Corby is not a regular musician. Matt graced the reality show in 2007 before setting off on a musical journey which would see him settle in London after signing for the Communion Label (owned by Mumford and Sons' Ben Lovett). For a man just 21 years old, Corbyhas accomplished a lot already, with new EP Into the Flame his third release.

Already a renowned performer, Matt spent early 2011 playing sold out shows in London, while also featuring at SXSW in Austin. His intimate "Secret Garden" shows in fans' backyards back home in Australia have become famous. Into the Flame highlights his growth as an artist, with four beautifully assembled tracks.

Lead track "Brother" has been one of the most played tracks on Australian radio this year. "Brother" is reminiscent of Boy and Bear's whistle-friendly earlier work, and I just assumed he would be another artist in the growing procession of Australian folk artists.

I was incorrect. The remaining three tracks surprised me, drawing immediate comparisons with the versatile vocals of Jeff Buckley. "Souls a fire" is a favorite - slow, brooding and bluesy - while "Big Eyes" is an angelic duo with keyboardist and ex-Middle East member, Bree Tranter.

Already a veteran of the industry, Corby's star is on the rise. Already planning a tour early next year, more music is bound to follow. An incredible young talent.