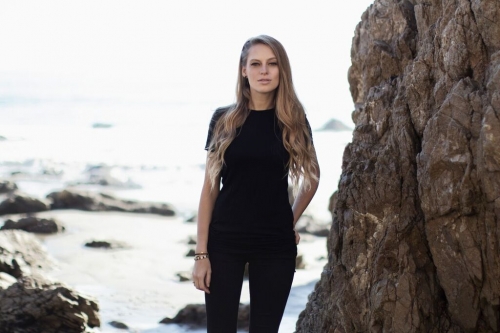 An Interview With Nora En Pure

Back in June I went to Splash House in Palm Springs and lost my car keys. Right before I left, Nora En Pure's team reached out to run an interview. When I got the email, I remembered a friend, who is a bit of a super fan, told me he'd bumped into her after a show in NY a couple of years ago and proposed to her. I was going to try and line it up so he could interview her live, but she was so swamped and was playing a really late set at the after hours. My friend, Alex, and I brainstormed questions on the way up to Palm Springs and shot them over Nora, who got back to us via email once she had a break.

Indie Shuffle: Can you tell me about your experience hiking with your dog in Switzerland?

Nora En Pure: Switzerland is fantastic for hikes. The mountains are extremely beautiful and in most areas you can also walk your dog off the leash, just when there are farm animals out you should keep them on the leash. The landscapes are very raw, hiking paths are at times primitive and you need to cross fenced areas with cows or goats. I love such adventurous areas where you feel just yourself and the nature.

Besides your pup, what animals do you feel the most connected to and why?

I really love whales. They are extremely majestic animals and make us feel so small. I love when nature can show off. It is still on my bucket list to dive with whales and experience these creatures in person. Otherwise I am really connected to the African wildlife. I grew up with it, as it was a big part of my childhood spending time in the wilderness in South Africa. Elephants are also extremely sensitive and deep souls, then sometimes so playful and challenging. I love watching them!

What’s behind the names of some of your songs like “Sphinx,” “Diving With Whales,” and “Lake Arrowhead”? Were there experiences that inspired the names and making of those records that you can tell us about?

The name "Sphinx" I chose as the main character of the track (especially in the Alternative Mix) is quite a mystical sound. First it was called "Riddle Of The Sphinx", but to keep it simple it just became "Sphinx." "Diving With Whales" as mentioned above is literally a dream of mine. Since I was quite young I often have this reoccurring dream about the ocean and mostly I'm with whales. This track was musically sort of a follow up on "Lake Arrowhead," and the themes in both of these tracks I find really deep and touching. They are both some of my most characteristic and favorite NEP tracks. The idea of calling it "Lake Arrowhead" came actually from one of my label partners, it was first called "Big Bear Lake" ;-).

What’s the best underground music scene in the world, and why?

In Europe there is a great underground scene. For me some of the best deep house or techno music definitely comes from Germany. But also countries like South Africa, Croatia, Israel, The Netherlands, Canada.. many places have a really good understanding of deeper music I feel. And I really love playing in the US, as the crowds are always very involved and more and more open for underground music.

Where have you found the best food on tour, and can you tell us about your most memorable meal?

On tour I often eat Thai food, as its quite easy to find and quite a safe bet and pretty healthy I guess. So in San Francisco there used to be this one Thai place. We went only once and it was the best curry we have ever had. Unfortunately that place got closed soon after, which makes that memory even more precious ;-) Then in Japan I once had a really good dining experience where you sit around the cook watching him do his mastering. That was fantastic food!
And to be honest otherwise I often eat Subway ;-) while touring there is rarely time to actually go out, look for new restaurants to check out and then it might not even be to your taste. So you better make sure what you get is good and ready in a short time!

Where was the first place you fell off your bicycle?

Now that you ask I remember when I was very young I sat on my dad's bicycle, which used to have these little children seats on the front of the bike... I fell down from there and my foot ended up in the wheel. That was not too cool, but other than some cuts nothing serious happened!

Hmmm I actually tend to stay away from the computer if I can. I often encounter some unpredictable problems with programmes while working that are probably the most time consuming thing, other than music I also enjoy photography a lot where also a lot can happen on the computer while post editing. That's already a lot of time I spend behind the screen. So I prefer to just go out with my dog and be outdoors in general to clear my mind from it all!

Outside of music and audio, where do you pull your inspiration from?

Definitely nature. I'm a big outdoors person and try to take the listener away with my music.

Do you have any upcoming releases or collaborations you’re allowed to talk about?

There is my new EP Don't Look Back that will be released this Friday (June 29th). It has been a while since my last EP, so I'm quite happy we could schedule some of my recent material for this EP. The tracks are all very summery and uplifting. In autumn I will then probably release a deeper one, that follows more the new explorative Nora En Pure sounds.