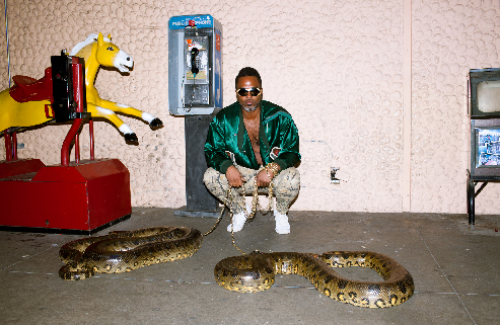 An Interview With Shabazz Palaces

Ishmael Butler is a trailblazer through and through. His influence can be traced back to the 90s, when Butler was one half of Digable Planets, one of the first groups to merge jazz and hip-hop. Today, Butler continues to innovate and challenge listeners with his latest musical endeavor, Shabazz Palaces. Shabazz Palaces often seems to transcend genre entirely, accessing new musical dimensions that can feel completely otherworldly.

Ahead of his performance at Eaux Claires festival in Wisconsin this August, we had the pleasure of chatting with the musical innovator about everything from ceremonial performance mask-wearing to genre labels as marketing tactics.

So it looks like this summer is going to be a big touring summer for you, supporting Radiohead in LA and even reuniting with Digable Planets for some shows. You’ve described performing music as a kind of ceremony, complete with rituals. What kind of rituals are involved for Shabazz Palaces when performing live?

Ishmael Butler: Some of them are just kind of personal and private, but like, getting in the right mind state, being relaxed, and having on the right adornments to be able to be prepared to channel the things that come your way, you know? When you’re playing and performing and reaching into those ethers to try to pull out a performance and a show. Transcendental states of mind I’m trying to reach, so just things that aid that.

The Lese Majesty track "Forerunner Foray” shares a name with a novel written by Andre Norton, one of the biggest names in science fiction writing. How, if at all, are the two “Forerunner Forays” connected?

Well I came to know the those words in that sequence from the book. I read the book, I read a lot of Andre Norton books, and I mean it’s abstract and using poetic images but it’s directly related to the book, for sure.

When Shabazz Palaces was first starting out, your identity and the identity of your collaborators were anonymous and you rarely interacted with the press. When I see photos of Shabazz Palaces performing live in mask-like headdresses, I can’t help but think of artists like MF DOOM or Daft Punk that have made a career for themselves behind the anonymity of a mask. Have you ever considered taking mask-wearing to the next level and using it as a tool for anonymity and ensured focus on the music?

Well, to look into the wearing of masks for ceremonial performance, you gotta look back farther than MF DOOM and Daft Punk, you know what I’m saying? And so for us it’s less about hiding who’s behind the mask as a personality and more about representing something more universal than a self when you’re performing. So it’s not really like you’re hiding behind the mask, and that’s gonna be the hook and the look to the performance. It has more to do with ancient rituals: African stuff, indigenous people from all lands of the world more than just kinda like something cool to do for the performance. That being said, I’m actually talking to the brother that made the masks we wore before about possibly doing something new, so that stays as something we might go to as part of our performance aspect.

Do you ever fear that your rejection of telling a Shabazz Palaces backstory in favor of a focus on the music is so unusual in music listening culture that it could have the opposite effect from your intentions? That it creates a shroud of mystery that makes people want to go out and learn more about you as people?

Well it’s never really been about being mysterious for the sake of that, you know? Just because every single artist goes about things the exact same way and this is just what you do, you come up with as much backstory as you can, and you throw it up there and hopefully somebody will be interested in it. Just cause everybody does that, I don’t necessarily think that it works, or that it matters. I think every artist should find their own path and do their own thing rather than trying to shove what their characteristics are into this bag of protocol or routine. So it was misinterpreted, “oh they’re trying to be mysterious, that’s their marketing claim” and it’s like “Look, we make music. So we’re going to do that, and then put it out. And whatever happens, and whoever likes it or wants to come see it or talk to us about it, we will.” It was never against the press or we’re not gonna talk to people in the media or anything like that. It was just like the auspice is always gonna be the music, the entree was gonna be the music, rather than propaganda, you know what I mean?

How does your opposition to the over-contextualization of music go into the way you identify in terms of genre? As a hip-hop fan, I’m personally quick to label you as hip-hop just as a way to be hopeful about the future diversity of the genre. Are you looking to be a part of movements towards “conscious rap,” or are you hoping to transcend genre labels and the limitations that come with them?

Yeah, I don’t really believe in genres. Genres are just something that kinda came up to categorize things to sell them, in a way, you know what I mean? And people identify with categories and genres in a society where external things indicate to others who you are and what you’re about. So it’s all about money and marketing. So at the end of the day, music is really music. It’s like saying “oh you’re a black human, you’re a white human, you’re a gay human, you’re a straight human.” Alright, cool. But like, everybody’s a human though right? Like we all have the same cardiovascular system and respiratory system and stuff. All of the things that come after that, you gotta investigate the reason they exist before you jump into it and associate with it. So I just don’t think of it that way. Of course, I get it. I know what the genres are, I understand. But then there’s “you can be this kind of rap, or that kind of rap, or this kind of rap” and it’s just like “okay but it’s music, you know?” and it’s for people to listen to, expand their mind, make them dance, make them have emotions. So I just keep it at that.

Do you think you as a listener have a similar outlook? Are your listening habits all over the map?

I don’t really listen to classical music, but other than that, I listen to everything.

Sometimes I feel like only true music fanatics, avid music listeners and seasoned musicians, are able to break from music norms and really experiment. Picasso famously said “It took [him] four years to paint like Raphael, but a lifetime to paint like a child.” Do you think your musical background in jazz or your work with Digable Planets paved the way for you to make more experimental music with Shabazz Palaces? Do you consider experimental music to be a return to basics or a kind of intellectual and musical advancement?

I think it can be both! You know, because it’s all about the perspective of the person making it and the way they execute it. The more that they know, the more that they can inject complexity into simple forms. Because it’s about nuance at that point. So yeah, everything you’ve learned and experienced goes into what you can create and put out. I can’t point to directly how, but I do know that I learned a lot from that stuff and it put me in a position to do what I’m doing now. It put me in a position in my mind state. I was able to contextualize things that if I hadn’t been close to that stuff, I wouldn’t have been able to.

How do you feel about people calling you the future of hip-hop? Is the idea of being labelled a trailblazer something that scares you with the pressure that comes with that, or does it give you freedom to break new ground?

That’s a good point. I mean I think it’s just hyperbole, really. It’s not like people can really predict the future, I think what they’re trying to say is that it’s different, that it’s not redundant or relying on tropes to express itself. So in the future, it’s a possibility that more people will express themselves without being tied to commercial or traditional formulas. So I can accept that, I think it’s cool. I think they’re trying to compliment us when they say that, so I enjoy that and I appreciate that.

Musically, you’ve been involved in quite a bit over the span of your career. How do you want to be remembered as an artist?

I want to be? *laughs* I want to be remembered as someone who really didn’t see himself as an individual who they gave music to and made music with these said characteristics, but more so as a person who understood that music was being given to me, you know? That the music that I made are feelings that happened to me, impulses that I experienced. That gave me so much more than I gave to it. So that would be cool.

Shabazz Palaces will be performing at Wisconsin's Eaux Claires music festival August 13. Head to the official website for tickets, line-up and more details! 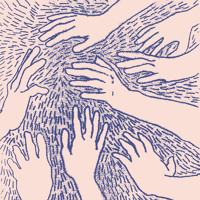