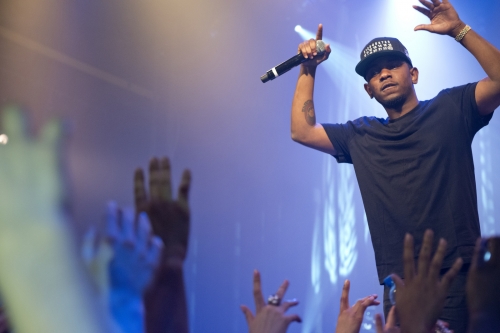 Kendrick Lamar's DAMN In Reverse and The 'DAMN Theory'

Before we give you Kendrick Lamar's DAMN. in reverse, we've just gotta give it up to Lamar for DAMN. being the no.1 record in the U.S. for the second week in a row! Reminiscing back to when DAMN. leaked, we were pretty sure this would be huge. But DAMN! it's done exceedingly well.

There are tons of conspiracy theories circulating this album. One being that a second release is still to come! Remember how amped we were when he announced a release date for DAMN.? Well, I just don't know if we can handle a whole other album... although we won't say no.

So fans went nuts, thinking a second album was just a few days away from being heard... only to be disappointed by this 'clarifying Tweet':

And another one from Kendrick too:

So with all that cleared up, one would think fans would be done with the conspiracy theories -- and definitely not in any state to start with Illuminati rumors. Well, that was until this happened...

You may have noticed throughout the album certain tracks featured reveresed lyrics. After YouTuber HalfFullMilk uploaded a video of the reversed lyrics from "FEAR." and "DUCKSWORTH." played backwards, fans seemed to go a bit nuts. Having stipulated that he was not hinting at anything to do with the illuminati, it still seems that's what most fans are focusing on.

But some upstanding, moral YouTubers took it upon themselves, as all good Internet civilians do, to set the record straight.

Conspiracy theories aside, here are the lyrics for you to read. Check them out and and let us know if you've got theories of your own on this one.

Whoever thought the greatest rapper would be from coincidence
Because if Anthony killed Ducky, Top Dawg could be servin' life
While I grew up without a father and die in a gun fight.

And read up on our review of DAMN. while you're here.