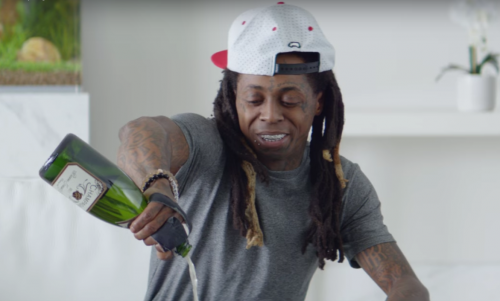 Lil Wayne is the newest face of Samsung, appearing in three recently released spots alongside actor Wesley Snipes. The Louisiana rapper is the ambassador for the newest iteration of the Galaxy, the S7, and examines its waterproof capabilities with a short champagne shower.

In the other ads, Wayne and Wesley Snipes fool around with the phones new virtual reality feature, birthing elephants, canoeing, and generally palling around. The commercials are pretty hysterical, and sadly, probably better than Lil Wayne's recent musical output.

Though the spots are blissfully short, Wayne's acting chops are undeniable, his charisma easily shining through in his gravelly lines. In fact, some, not me, may even suggest that Weezy's performance is comparable to that of his former Cash Money running-mate and hip-hop acting GOAT, Drake.

Drizzy of course, was one of the stars of this years Super Bowl ad bonanza with his Hotline Bling inspired T-Mobile spot:

The former child star and Degrassi actor is easily comfortable in front of the camera, with a quick smile and calm demeanor. Not to mention, the boy has some range, as his SNL hosting resume shows.

At this point, you may be wondering where Wayne and Drake's acting turns rank in the great pantheon of rapper commercials, well let's go to the tape.

In our review of the esteemed art that is hip-hop commercials, it's only right to start with maybe the most iconic rapper of the 2000's, Kanye West. 'Ye's acted on a number of occasions, but I'd bet few remember his classic 2004 Boost Mobile ad with Luda and The Game:

The "Where Ya At" spot is probably the only time in the history of Boost Mobile that they've been associated with anything cool, and the nostalgia of popped polo Kanye is priceless. More than that though, is the high level of unintentional comedy that comes with three multi-millionaire rappers trying to look hard while trading bars into flip-phones. Kanye's sheepish face when he decides to "keep the beat for himself" is everything. 9.5/10

Next, I'd be remiss if I didn't include this criminally underrated gem from 2015:

Yes, that is Juvenile hawking appliances in 2015. The former Hot Boy seems to have fallen on leaner times, but his commitment to pushing washers and dryers in this twitter video is downright inspiring. Though arguably more low-budget than the other offerings in this overview, Juves work is lovably imperfect, with the sound of humming refrigerators partially obscuring his companions pitch. 10/10

Alright, so before I call it quits, and watch that Juve The Great masterpiece like twelve more times, there's one more ad that has to be mentioned, Jay Z's 2003 Heineken spot:

This last commercial is masterful for countless reasons, but to list a few:

2. That Jay-Z chooses a Heineken after turning down fridges full of champagne

In conclusion, Juve had one of the best commercials of all time!