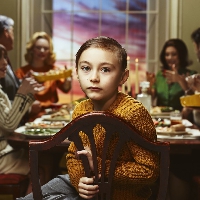 The first words that come to my mind hearing this song? Predictably annoying.

I think it's time for me to basically make a public confession: Passion Pit can rub me the wrong way. And even though this is a brand, spanking new song, I'm still...not going to have it on repeat.

Yes, I know that opinion is going to generate some controversy, but bear with me: music is subjective and based on personal taste (my opinion just happens to be right).

"Lifted Up (1985)" will appear on the band's upcoming album Kindred, available for pre-order here and due for release on April 21st.