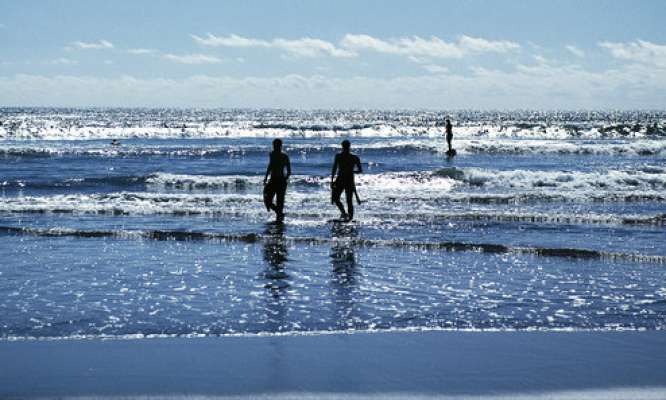 We're pleased to announce the premiere of Ennui's debut album, Telepathic Beat, with an exclusive album stream. Give it a listen and read on to learn more about the hardly mundane music of Ennui.

A hook: That which instills anticipation and curiosity in an engager. The hook functions primarily in writing, but the term can be applied to life just as well. A good hook can be thought out well in advance, or sometimes, it just happens. With the amount of attention grabbing music that exists today, it may just be necessary for musicians to start thinking in terms of good hooks.

The hook in Telepathic Beat is "Feel It."

It's the sympathetic beginning that sets the tone. A feeling akin to when a friend attempts to tell you about a weekend that you missed out on. The beginning is familiar yet new, but there are a few stories occurring all at once, and then the main synth keyboard line is introduced. A deliciously tropical feeling falls upon your ears, just in time for Jim Doutrich's vocals to break through.

In the span of our lifetime, we hear a variety of voices that, after a while, begin to resemble one another. For the vocalists, we'll hear the gospel belters, the crooners, the mumblers, the talkers, and many more. Ennui falls somewhere between the crooners and the mumblers in a category I'd like to call the bedroom voice.

It's the bedroom voice that only can be heard as two lovers lay in bed staring at the ceiling, legs intertwined, with nothing particularly exciting to say to one another. And then, one begins to sing. Perhaps it's a song they've made up, or maybe it's something heard earlier in the evening. Either way, the voice that's heard isn't loud and attention grabbing. It's not like the neighbors can hear what's going on in your bedroom. The song is just for you in that moment, and the voice is just loud enough to make an effort to hit the high notes, but not confident enough to be in, say, a shower. It's aware of the walls that the sound bounces off of. Reverb is real in this moment.

On Telepathic Beat, there's a sonic story being told, aside from the playful lyrics. A layer is established from the beginning in many of the songs, and then other layers are added. Not entirely groundbreaking, but paired with the cathartic vocals (which seem almost bored yet simultaneously full of so much life), synths, drums, and hand clap sounds are prominently featured. For every time Ennui calls out "I can feel it," the synths respond with an aural answer, in a way that is almost meant to be filled in by the listener. What can you feel?

Ennui's debut record is slated to release September 23 for Mush Records, and you can follow him on SoundCloud here.