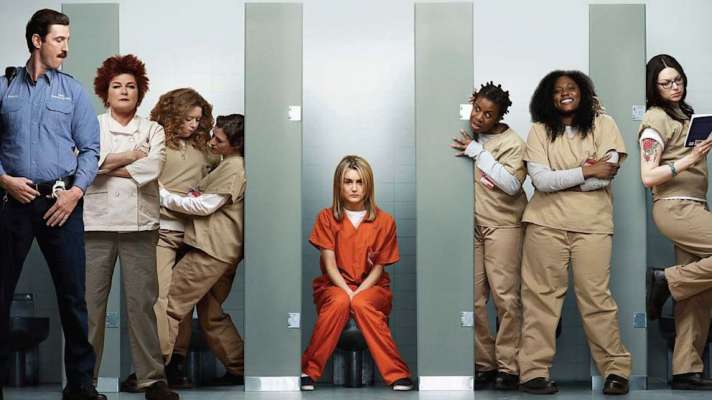 From Barneys to the federal prison system? I guess there is a fine line between being a yuppie and living in an orange jumpsuit — especially if your name is Piper Chapman.

Netflix’s newest original comedy, Orange Is the New Black, stars Taylor Schilling as Piper, a well-to-do thirty-something who is finally getting her life together. No longer a raucous lesbian looking for danger, Piper bides her time making boutique soap and spending time with her writer fiancee (played by Jason Biggs), until her past finally catches up to her. She ends up surrendering herself to federal prison for a past cash smuggling incident for her then drug-dealing girlfriend (played by Laura Prepon).

Prison, it turns out, is not the vacation that Piper had imagined; the “surviving prison” book she read failed to mention a few of the unwritten rules that will help her survive a 15-month stint — things like not insulting the cook and not turning down the wrong inmate. It also doesn’t help that Piper’s ex-girlfriend — the one who’s responsible for her new accommodations — also finds herself in the same prison.

What prison dramedy wouldn’t be complete without some quality tunes to help pass the long days? There are some super groovy bass-filled tracks on the soundtrack, like “Walking Backwards” by Leagues, “Gangsta” by tUnE-yArDs, and the super danceable “Get You Some (Ft. Brit Lauren)” by Captain Planet. And don’t forget the rockin’ theme “You’ve Got Time” by Regina Spektor.

So if you haven’t checked out Orange Is the New Black, what are you waiting for? Go sign up for Netflix right now, lock yourself up in your room, and binge watch all 13 episodes. You can thank me later.