Christiana Bartolini
Published:
Jan 22, 2011
Total plays:
745
Saved:
25 times
Sounds like: Patti Smith, David Bowie, Velvet Underground
Tags: female vocalist, indie rock, rock
Why do we like this?
Anna Calvi, you will be a legend. I am completely entranced and compelled. I'm totally moved; my heart sways. I am beyond ecstatic that such raw, fresh, yet vintage-esque talent still exists. If Quentin Tarantino were to make a Kill Bill 3 (and I think he might), Anna Calvi's self-titled debut album would be perfectly suited as the soundtrack!

Her album doesn't debut in the US until March 1, but I really couldn't wait to review it. This girl is on her way to burst through the scene while inadvertently demanding attention and respect from all who succumb to her strikingly inviting musical style. Whether you tend to cater to just a couple specific genres, or you are a person of worldly tastes, Anna Calvi will most likely have you under her spell.

The first word I think of while listening to this album is "conviction," and this girl's got a ton of it. She's on a mission (I'm not sure what kind yet), but ya'll better make way because she's not slowing down for anyone. And all she needs to make this magic happen is a guitar, percussion, and a harmonium.

This album is a beautiful, jagged piece of art that challenges the creative processes of most musicians today... and yet it seems like it comes so easily to her, as if she has been reincarnated from a glam-rock punk princess from the 70s. She's already garnered nods from both Brian Eno and Nick Cave, for christ's sake. Whatever her elixir is for musical creativeness, please Anna, don't ever stop.

Anna's musical approach seems hauntingly heart-wrenching; one second she's on her knees, unworthy of the gods that she's whimsically singing, even pleading, to... the next she's got you by the throat, unapologetically telling you how it's going to be. It's intimately spooky... theatrical even! There's an unavoidable classic rock atmosphere topped with raw emotion, drama, passion, loneliness, and desire that saturates Ms. Calvi's style. Anna, herself, said it best:

"It's a record about the internal forces in life which are out of your control and can take you over, and how you survive them. It explores intimacy, passion and loneliness. There is an element of darkness to the record but there is also a sense of hope. This album is the culmination of my whole life up until now... Music's so sexual. How can you not express that in some way? Playing guitar is a sexy thing to do. And there is that thing of...when you love someone so much you think that you could kill them. I've definitely felt that." - dominorecordco.com/artists/anna-calvi

If Patti Smith was dubbed the "Godmother of Punk," then Anna Calvi must be her goddaughter.
- Google Christiana Bartolini
Streaming source: http://soundcloud.com/undertoner/anna-calvi-love-won-t-be
TOUR DATES
View all X tour dates for .

Kill City Creeps - I Got A Letter 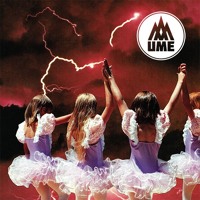 Ume - Chase It Down