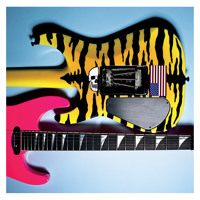 Bri Guy
Published:
Sep 03, 2013
Total plays:
23,209
Saved:
150 times
Sounds like: Cults, Purity Ring, Charli XCX, Grimes
Tags: Electronic, female vocalist, electro-pop
Why do we like this?
Sleigh Bells have been one of my favorite acts since they releasedTreatsin 2010. They followed that up with Reign Of Terror in 2012, which was one the best albums of last year, in my opinion. The band, known for their electronic rock stylings, features Alexis Krauss (singing her heart out with loud vocals) and Derek Miller (bringing strong guitar play as well producing their music).