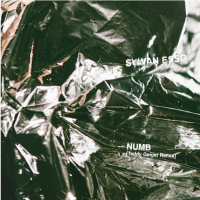 Last September, Grammy-nominated Sylvan Esso released their third album, Free Love, to worldwide acclaim, as well as a multimedia art project called Opening Night and a podcast called Shaking Out the Numb. On April 8th of this year, they premiered a new version of one of the album’s highlights, “Numb,” remixed by renowned solo artist, songwriter, and producer, Teddy Geiger.

Geiger’s remix adds a grounding, low-toned, steel-stringed guitar to a song that while pretty and enjoyable beforehand, needed a little bit of extra depth and texture. While the original version relies on synths of varying octaves to create peaks and valleys on what is inherently a very simple track, Geiger’s remix shows us that it was missing a strong, foundational rhythm to carry it forward, even if we didn’t know it was lacking until it was present. It provides warmth and a driving backbeat to create a more rounded version of the indie electro-pop original.

On the origin of the track, Sylvan Esso mention in an interview with KCRW:

“The song itself is about figuring out how to shake yourself out of depression by celebrating. Teddy took the initial theme of the song and just brought it into a much more quiet and emotional space than I was expecting. I’m just so grateful that we have gotten to work with her, and I can’t wait for you to hear it.”

Free Love was released in September 2020 on Loma Vista Recordings, and the new remix of “Numb” is available everywhere.