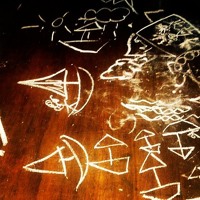 I got hooked on this song when a slick remix by Klaves popped up a week or two back. Since then I've been flip-flopping between the two, and have decided that they both deserve to be on the site.

"Thieves" was released roughly four months ago by London-based artist The Beach. To date, it's the only song on his SoundCloud.

The track starts out as simple and acoustic, but builds with a Patrick Watson-esque crescendo that absolutely wins me over.

As far as folk goes, this is a solid single.