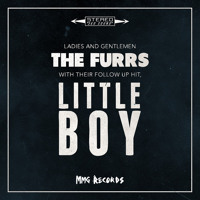 Hugh McClure
Published:
May 07, 2014
Total plays:
11,015
Saved:
116 times
Sounds like: The Black Keys, The Dead Weather, The Peach Kings
Tags: female vocalist, rock, blues rock
Why do we like this?

Despite constant changes in the music industry, there will always be a place for great rock music. Australia is no different in this regard, and no matter how many 'buzz' genres pop up, we'll keep going returning to the classics - especially when they're as good as the latest single from Brisbane band The Furrs.

Having used their first release "Get On Your Horse" to introduce themselves, the band is back to slice us off another serving of gritty blues-rock on new single "Little Boy" - with Indie Shuffle on premiere duties.

This one has that slightly out-of-control-while-still-under-control feel to it, highlighted by the raucous vocals of Gabriella Joelle and an incredibly intense guitar solo toward the end. Brilliant stuff all-round; plenty of fun to be had here!

"Little Boy" is the second single from the Furrs' debut self-titled EP which is due out on May 15.