Max Jacobs
Published:
Apr 05, 2011
Total plays:
17,054
Saved:
65 times
Sounds like: Club 8, Dum Dum Girls, Cults
Tags: indie pop, surf rock, best coast
Why do we like this?
Given the crazy influx of surf rock inspired bands lately (Surfer Blood, Dum Dum Girls, Best Coast, Tennis), it can be easy to forget that the Danish duo The Raveonettes have basically been making this type of music all along. Throughout their four previous albums, their sound has always had a rather tranquil, washed-out feel to it, as if they slipped some valium before hopping on that beach cruiser down to the ocean. Their latest release, Raven in the Grave, is no exception: the nine-song album is full of bright vocals floating over 80s pop synthesizer, electric guitar, and a steady beat from the kick drum.

Like many of the surf pop artists of late, The Raveonettes feel that simple is okay: whatever you may think of them, you're not likely to call them flashy or overproduced. It's very hard to pull off this sound for a whole album, however, without the listener dozing off. It does make for pretty good napping music, though (which is also why I'm still so impressed with the intentionally simplistic yet captivating self-titled debut record by The xx). Though some might credit the Danes with the resurgence of this style of pop music, particularly in the States, The Raveonettes have kind of become the Jack Johnson of surf rock.

The record starts upbeat, however, with the opening track "Recharge & Revolt" which is reminiscent of some of their earlier catchy tunes, like "Love in a Trashcan," and which sounds like a homage to the off-kilter distorted riffs of cult-guitar hero Bob Mould (of Husker Du and Sugar). The album remains pretty low key after that, which really is the style they seem most comfortable with. But frankly, I find it rather hit or miss.

I realize this might just sound like I'm hating, but really I'm expressing how I've always felt about this band. Their new record is a continuation of their sound and style, and if you dug it in the past, then you'll dig it now. But if you're looking for a new direction, something challenging the indie pop standards of the day, I'd pick up something else (like the new Lykke Li, for instance).
- Max Jacobs
Streaming source: http://soundcloud.com/orchardmktg/recharge-revolt
TOUR DATES
View all X tour dates for . 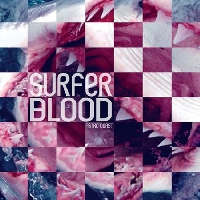