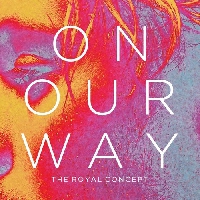 The Royal Concept On Our Way

Stockholm quartet The Royal Concept have been going hard since 2010, but it wasn't until last year that we picked up on their infectious songs such as "D-D-Dance" and "Gimme Twice." Since then they've been one of my favorite indie pop acts, so it was genuinely a nice surprise to see them upload this new track "On Our Way" a few hours ago.

The single comes with little additional context. It will likely be part of a new album, but I haven't exactly seen any announcement to that end (it wasn't on their previous EP, The Royal Concept. But hey, given that we're more about bringing you the music and less about trying to review it, I'll just let the song do most of the talking.