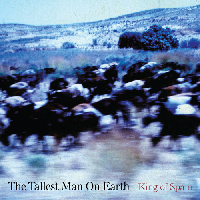 I spent many family road trips listening to Paul Simon's Graceland as I battled carsickness in the back of our Volvo station wagon. And while his famous 1986 album was not nearly as cool as Raffi, it didn't illicit incessant complaining the way that James Taylor did (another family vacation favorite). But it wasn't until hearing "Diamonds on the Soles of Her Shoes" on the radio in high school that I realized, "Wait a second, this album is totally awesome." I'm not the only one

to have had this realization (just listen to Vampire Weekend).

Kristian Matsson - who goes by the moniker The Tallest Man on Earth but who could actually fit in your pocket - has no backing band like Paul Simon, but that will not stop him from capturing your full attention. His songs are clever and always sincere: poetically describing a world both more romantic and sentimental than really exists.

It seems perfectly fitting that he should choose to cover a song by an artist who has been so masterful at evoking nostalgia with witty but heartfelt music.

The Swedish Mattson was far from home when I saw him live in San Francisco a few months back. He mentioned to the crowd that he was feeling homesick, but especially so because it was Mother's Day. Before singing "Graceland," he remarked, "Here's a song my mother likes."

Well, Tallest Man on Earth, I like it too. And so does my mom.