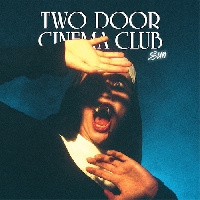 Looks like it's becoming increasingly more and more common for bands to release their full albums on Soundcloud. Case and point: Two Door Cinema Club has uploaded a full stream of Beacon to their account.

The last single that I'd heard ("Someday") was somewhat lackluster, but I think I've found a good one with "Sun." It's both original and still true to the sound we'd expect from TDCC. I suppose you could say it's a much more interesting track than other attempts.

You can grab the full thing via iTunes.