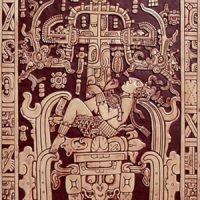 Action Bronson Descendant Of The Stars

Action Bronson is back with brand new track, "Descendant Of The Stars," the theme song to his latest Internet series, Travelling The Stars: Action Bronson And Friends Watch Ancient Aliens.

The title of the show is self-explanatory, as Bronson spends the show getting high with his famous friends while watching hit show Ancient Aliens.

"Descendant Of The Stars" is another Bronson and The Alchemist collaboration that once again displays the magic these two can create. Alchemist combines a piano loop with old school 90s beats as Bronson declares himself, "A descendant of the stars" while confirming his basketball prowess with the line, "My jump shot got an ark like Noah."

This is everything you'd expect from a Bronson tune, and should satisfy fans until Blue Chips 7 drops.