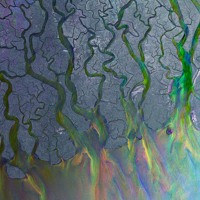 Alt J, âˆ†, whatever you want to call them "” they rock. I'm not one for Top 10 lists, but if I made one for artists, then they'd be on it. Same goes for Top 10 albums when I think about the band's debut effort, An Awesome Wave. If you haven't listened to that in its entirety like 80 times by now, then it's time to clear your Saturday plans. What more can I say? It's an awesome wave.

We've featured several of Alt-J's tracks around here, and recently recommended a couple quality remixes. I can't get enough of the UK quartet right now. Here's what Alt-J had to say about "Ms" on SoundCloud:

"Ms describes the raw nagging hangover of a broken relationship, but is counterbalanced by both the hope of future friendship by both parties."