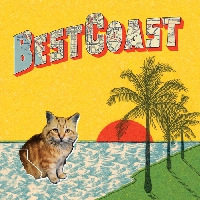 Best Coast When I'm With You

Best Coast is the latest project of Los Angeles musician, and former member of Pocahaunted, Bethany Cosentino. In her first musical endeavour since her work with the latter, Best Coast marks her return to California after a year in New York with

a total change in sound - from the depths of ambient experimental rock (which incidentally saw her support Sonic Youth in 2007), into beach punk and reverb soaked California roots music. She recently impressed at this years CMJ Marathon in NYC, and saw the latest in a long line of 7" singles, the Make You Mine 7-inch, come out on Black Iris records last week.

She makes 60s inspired pop songs around the 2 minute mark, taking parts of the timeless Beach Boys formula and combining them with lo-fi overdriven rock. The new record, and subsequent album, is being produced by Fool's Gold's Lewis Pesacov. Along with her new musical partner, Bob Brunn, Bethany has said goodbye to old labels Dum Dum Girls' and Graffiti Island's Art Fag and jumped ship over to Black Iris.

Cosentino has played a series of support dates since summer, including some with good friend Nathan William's Wavves, and has built up a whirlwind of hype around her shows. With a large number of pre-existing industry connections, an eager record label, and loads of fantastic material and performing experience behind her - it's going to be a busy 2010 for Best Coast. Dates on her calendar include shows with No Age at the Art Fag fest before the end of the month as well as a date with Spaceland in December. She's recording material for a debut album sometime next year, and constantly putting out more and more material.

Without a doubt, Best Coast is one of the most exciting emerging garage pop artists on the scene at the moment. Her songs Sun Was High (So Was I) is airy and reverbial pop song with a catchy melody line, and That's The Way Boys Are is a careless anthem of sunny harmonies and punkish overtones. Her songs range between the airy and the upbeat, but always retain an air of youth and carelessness, and that California 'life goes on attitude' which comes across in everything Cosentino does. These songs will take you away, and make you want to move out there, forever. She's a very talented individual, and at 22, has many years of life on the 'best coast' ahead of her.