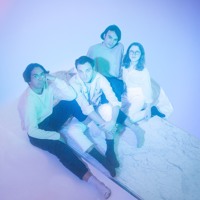 I had the honor of discovering and meeting so many talented artists and musicians during SXSW, but there is one particular act that truly stole my heart and attention.

I hadn’t wandered more than a few feet into Flatstock (SX’s incredible gig poster exhibition) when I heard this spellbinding noise. I politely excused myself from a friend, and wandered toward the dreamy sound. On a small stage within the great exhibit hall was Montreal’s Bodywash.

While I counted five talented artists with instruments, the core of Bodywash is Rosie Long Decter (vocals/synth), Tom Gould (bass), Chris Steward (vocals/guitar), and Adam Macpherson (guitar). Rumor has it they met in college in 2014 and 12 months later produced a four-track, self-titled EP. Their upcoming album release, Comforter, is scheduled for a 2018 release.

This remarkable act describes their sound as “cream pop,” which is both bold and rather accurate.

In an interview with TheTab, Steward reacted to being called synth pop:

Synth pop isn’t a good way of describing us,” he said. “We aren’t synth driven, we are much more guitar based and a bit heavier than synth pop. We have our own brand of dream pop, our own take on it and so that’s where cream pop came from. Yeah, it’s heavier. It’s been whipped. … It’s more pasteurized.

I’ve read and reread this quote about a dozen times. They aren’t wrong.

What I find most delicious about Bodywash’s sound is the rich texture it possesses. While my normal diet of synth pop leaves me feeling weightless and celestial, this new cream pop noise has real weight to it. It has all these beautiful atmospheric, dreamy, swirling qualities but with the calories. If Cool Whip had a noise, it would be this band. It's sexy, but not too sweet.

Bodywash is a little bit Unknown Mortal Orchestra and Tame Impala, tangled with Washed Out. It’s all brilliant. It’s all fresh (and so clean, clean).

I have handed my entire heart over to this band, and you should do the same— fast.

Also, according to their SXSW profile, they are seeking a few professional connections. Perhaps a label and a global booking agent. Tell them I sent you. 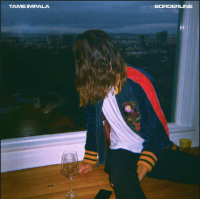