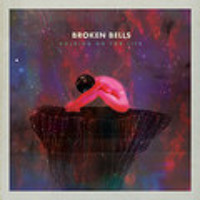 Joshua Mellin
Published:
Aug 20, 2014
Total plays:
14,393
Saved:
243 times
Sounds like: The Shins, Damon Albarn, Beck, The Black Keys
Tags: indie rock, electronic-rock, the black keys
Why do we like this?

Since Broken Bells' debut in 2010, The Shin’s James Mercer and producer extraordinaire Brian Burton (Danger Mouse) have been swirling funky tones into cinematically inspired sci-fi dance grooves. While the duo’s partnership has remained consistent, their other responsibilities seem to put an invisible timer on their collaborations.

I was greatly looking forward to witnessing the complete visual and lighting components of their set indoors during their recent Lollapalooza aftershow at the House of Blues in Chicago.

From behind futuristic white podiums, the two overlooked a mirrored orb in the center of the stage while mesmerizing visuals of galaxies, worlds, and the human brain swirled behind the band on a giant circular screen. Playing through highlights of both their self-titled debut as well as this year’s excellent After The Disco, they even included “Meyrin Fields” from the often overlooked EP of the same name. The staging production remained intimate yet impressive, while complimenting the music with a visual experience equally as emotive.

For a side project, you can't help but be impressed by the fully formed aesthetic that is Broken Bells. With a more realized vision than most other musical acts, all the pieces seem to have grown naturally from the simplicity at its core. Even greater, Broken Bells presence has helped renew Mercer's work for The Shins and influenced Burton's producing, as evident on the most recent Black Keys album he produced.

With a new Shins album on the horizon and Cee-lo already itching for a Gnarls Barkley reunion, the upcoming run of fall tour dates anchored around Austin City Limits and Life is Beautiful Festival may see the pair packing it in. The final date currently scheduled for the rotund Masonic Auditorium in San Francisco seems fit for an After The Disco dance party finale. Hopefully when the two finally do have to go their separate ways, it won't be for long.

To coincide with the release of their “Control” 7 inch, Broken Bells are giving away a band-curated jukebox, complete with After The Disco paneling. Available August 25 at local record stores, each copy will include an entry code.