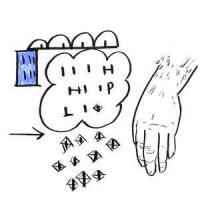 Damien Jurado has recently launched his own record label, Maraqopa Records, and with it, his 17th album, The Monster Who Hated Pennsylvania. “Helena” is the first single off the new album, and is a downtempo, acoustic folk ballad that manages to find the ephemeral within the quotidian, presented in the no-frills manner we’ve come to expect from Jurado.

The Monster Who Hated Pennsylvania comprises ten songs, each telling a story of people who refuse to be kept down by unfavorable circumstances. The dry, homespun sound of the record allows for a sense of honesty, purity, and authenticity, in which Jurado is able to explore the liminal spaces of the human experience, referring to it in a statement as, “a middle ground between light and shadow.” It’s the space between a blink and a tear, between sleeping and waking, between life and death, connection and loneliness, dreams and reality. A space of daydreaming, of stargazing, of half-forgotten memories. Jurado traverses this emotive territory at his own pace and reaches out to gently take your hand as he does.

Despite the sense of loss and love present in “Helena," this wistful single is holding and comforting, the resonant melancholy wrapped in a warm blanket of solace, and engaging in its simplicity.

“I keep in touch with my man down the hall

He was caught up in the laughter of moons

We were never as big as the world”

The Monster Who Hated Pennsylvania is self-produced by Jurado on Maraqopa Records, and is due out May 14th.