Honnestly, this is exactly what I wanted to hear on a Friday evening (see what I did there? "Honnestly"? Brb, laughing).

The Indie Shuffle heavy-hitters HONNE have been releasing songs at a steady pace for the last couple months, and this one manages to hit all the right notes for me. Yum!

At this point I'm not sure if they're releasing a new album. But uhh... they've certainly released enough songs to be add pretty good weight to that hypothesis. I could probably Google it, but I'm too busy jamming to this song. 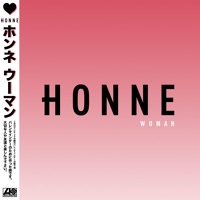