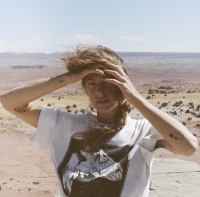 Australian singer-songwriter Indigo Sparke, will release her debut album, Echo, on February 19th, 2021. It has been co-produced by Adrienne Lenker along with Andrew Sarlo.

"Baby"is a wonderful and haunting single. Sparke is poignant, singing over music that’s there to cradle her vocals tenuously, never overtaking and letting her croon about loss and longing. The whole song feels like it was composed next to a cozy little campfire on the beach, with an ear close to the guitar to hear each chord.

The synth and glockenspiel were played by James Krivchenia and Nick Hakim, respectively, and Lenker handled the soothing backup vocals. So, this has a lot of loving support from Big Thief.