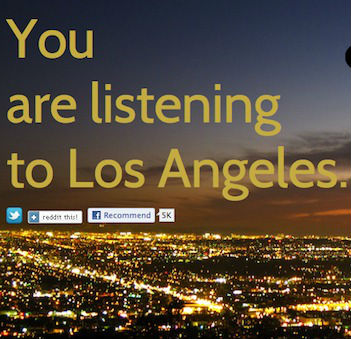 Ambient music and thoughts on the nature of consciousness - what's not to like?

Eric Eberhardt is the creator of youarelistening.to, a radio station that pairs ambient music with samples such as police radio or philosophical talks. While some find it a bit creepy, there's some intangible connection that floats around between this "deep" community that seeks to make an emotional connection through the Web.

I was lucky enough to hang out with Eric for the night in a seedy Chinatown bar to hear what he thinks about youarelistening.to. Check out the story behind the site and his thoughts on the value of listening to this music while getting a sample of some "Deep Thought" from Alan Watts.

It's a website that mixes ambient music with things like live police radio - in real-time. That's the 5 second elevator pitch.

I guess we could also talk background, i.e. where I came up with the idea, which is about a year ago when the Giants won the World Series.

Quick story: I was in Civic Center, where they had the big city-wide celebration. That was exciting. We were running around, getting donuts, everything seemed cool and under control. Then, I remember I went home and went on the Internet and I started hearing stuff on Twitter. Like, really crazy stuff happening. People hijacking MUNI buses, etc. People were on Twitter, sending out links and someone sent out a link to the SF police radio saying you could listen in. I was listening and, you know I'm not the type of person who will listen to police radio for hours on end, that's not me, so I got bored and turned on some music instead. That worked really well for me - the two together - ambient music and offbeat sampling. I was playing jazz and I found the mix to be great, really intense instrumental music with police radio. It was really cool.

So within 24 hours of launching, many people around the world were listening, e-mailing me, commenting on Twitter. I decided I should and could add more cities so I opened it up to New York, Chicago, and, of course, San Francisco (our local one).

Why do you think ambient music and radio is so appealing to listeners?

The really obvious juxtaposition of what's on police radio, i.e. what's often really heavy like murders, robberies, car accidents - stuff people don't ordinarily consider peaceful or quiet - mixed with ambient music works really well. It's probably the fact that the radio deliveries are, in fact, cut and dry. "We have a car accident on Lakeshore Dr., 10 vehicles involved, 2 fatalities." For all those involved, i.e. police officers, dispatchers - it's just their job, they're trying to do it efficiently, they're trying to take care and help people. They're not invested in it emotionally - so that works well with the ambient music. The mindset for them seems to be that, this stuff is just happening.

If you think about it too much it's a real downer, it's kind of creepy to "listen in" to personal trials and tribulations - but that's life happening. If you over-analyze it you will get creeped out but if you just listen to it as background noise, it kind of seeps in and affects you without that negativity. That's the one place where it made sense to add in foreign language stations like Montreal - because if you are listening to police radios in another language it's just more about the sound effect and human connection then what's really happening. Of course, there's other stations, like "Deep Thought," that are about philosophical concepts, e.g. lecturing about the nature of consciousnesses or what is reality. [featured here]

Ambient... it's one of the easiest places to start I guess. First off, there's already a lot of it. What I found to be really cool is that there's a lot of free ambient on soundcloud. Made not necessarily by professional musicians but by people who have radio gear and just make music because they love it.

Second, ambient music works because it's consistent. If you are trying to pick out a playlist of "great" jazz or techno or DNB - or whatever - there is just too much variability. You might find something peaceful, but there is also something distracting possibly mixed in.

Ambient music doesn't have that issue. So much of it can be intense emotionally or thematically but there's no drum solos, no distractions - at least comparatively. Nothing distracts from the mix.

When's the best time to listen?

I find the best time to listen to the site is at night. You know, the middle of the night. Shady stuff going on all over the world but in Russia it could be day and then you could hear drunk people getting out of a bar. That's an interesting juxtaposition.

So you think there's any "value" to listening in?

I think it depends on the person who is listening in. Like I said before, I've gotten feedback from people who are in emergency dispatch situations who related that it struck a chord with them. In how they deal with all this stress, all the pressure of their job. There's all this "heavy stuff" going on in life but that's completely different from just listening to it. You might not even understand English but you might just like the way it sounds. So it depends on the context of the listener the value you derive.

As well as what's "happening," i.e. murder or robbery, a lot of what happens on police radio is not about stuff that's intense. That's always fun to listen to - although more mundane. One of my favorite things is hearing officers radioing in their time for break like "Where are we meeting up for lunch?" That day to day, administrative stuff it's beautiful.

Right! I think there is some value in getting people to listen to that stuff even if they are not thinking about it directly in that moment but just soaking it in. It humanizes the process. Law enforcement, or whatever you are listening to.

What's the next step for youarelistening.to?

A mobile app to take the listening experience yo another level, i.e. walking around and having it realtime in the real world. Or, for listening to it as you fall asleep at night, like a bedside table sort of thing.

Also thinking about a CD/vinyl version, or whatever, something that's not real time but finished. A work that someone can load onto their music player, their iPhone, their car CD player and listen to as a series. There are literally thousands of ambient artists out there on Soudcloud that would fit in to the mix so 1, 2, 10 cds"¦ there's a potential for an on-going youarelistening.to series.

Or maybe an art gallery installation.

What would be words of wisdom for those just listening for the first time?

If you're interested in this site, contact Eric via Twitter @idontlikewords for more information. Be sure to also keep an eye on his Kickstarter for any upcoming projects.

Shout out to Cyberchump for the fantastic track played here, "Abstract Air."